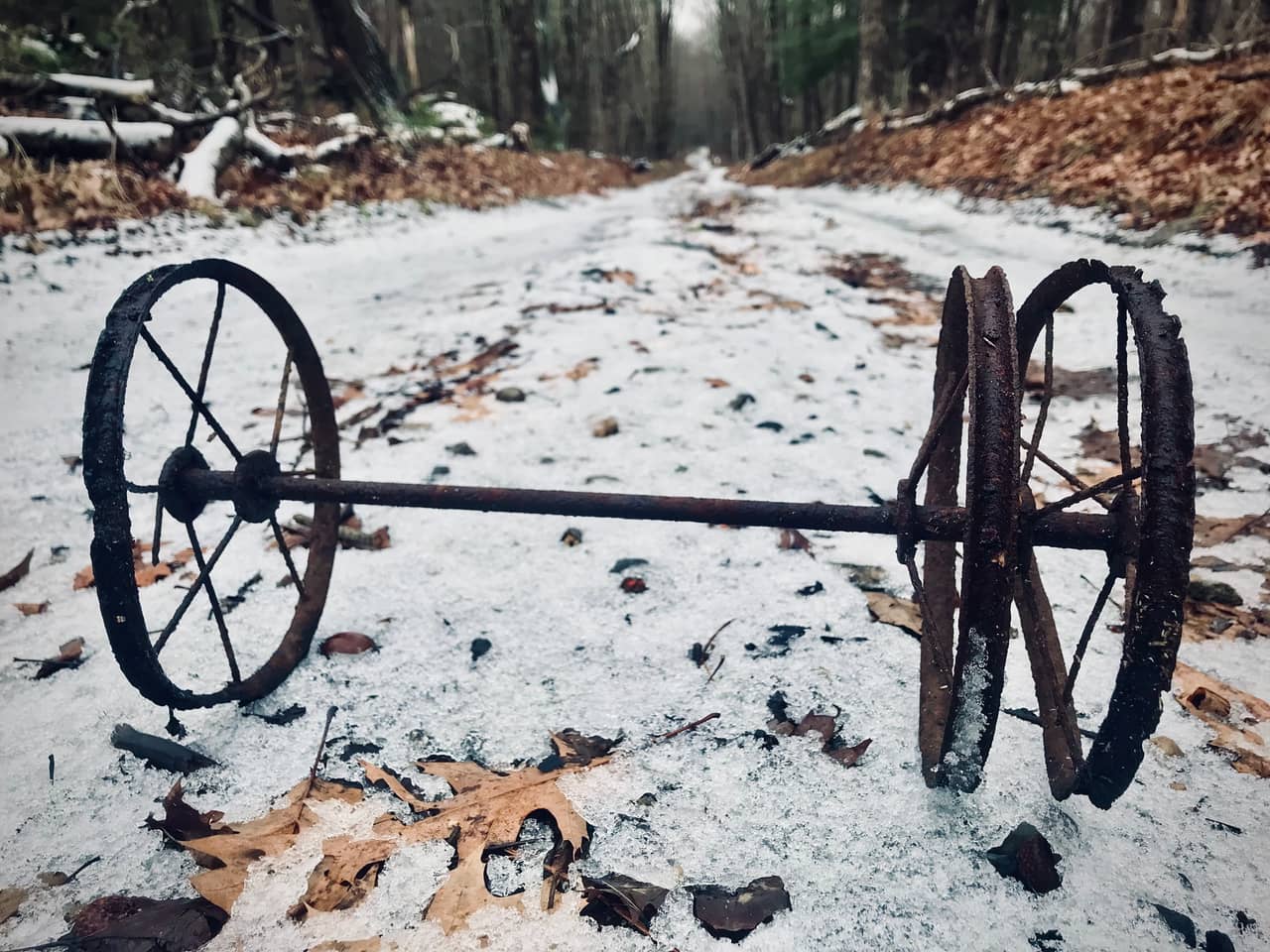 Before continuing, make yourself rooted.

Slow down, breathe deeply, and focus on your feet. Feel the sensations on the soles of your feet; it could be a faint tingle, or an itch, or the pulse of blood flowing through. Extend your sensitivity to the hardness of the floor, and drop deeper through the many layers of wood or stone or air that separate your feet from the earth. If you feel inclined to root yourself further, feel into the bedrock, the crust, the mantle, the molten iron core of the earth. The rest of this essay will be here when you're satisfied with grounding.

If you have no difficulty feeling into your feet and the land that supports you, the rest of what I'll write probably seems self-evident. But I suspect that, for most people, some part of the exercise will be a challenge. Even as the body is ever-present, it somehow feels distant. The land outside your door is abstracted. You know it's the earth – an 8,000 mile-wide rotating rock – but you certainly don't feel all of that. It's just there, somewhere beneath the pavement.

Have you ever tried explaining calculus to someone very drunk? You might find that it's not worth the effort, not even for entertainment value.
Over the years, I've had many online conversations with people who were high. Whether they were taking recreational drugs or the mind-altering prescriptions which everybody seems to be hooked on, the results are similar – the scattered mind remains far from the feet, or the earth, making it nearly impossible to come down to the ground. If somebody is unwilling or unable to slow down, there's not much you can do. Unfortunately, the ones who would most benefit from the exercise are least likely to do it; the clouds are fun to play in, and anyway, we've lived up there for so long.

Earlier today, I felt conflicted between attempting to write down my thoughts and going outside to chop firewood for next year. I decided to chop the firewood, but once I got outside I felt struck by the silence of the forest. Standing on the stump of a recently-felled 80ft pine, I looked through the dormant trees, hearing nothing but ice melting and dropping onto a thin layer of snow. The animals and wind are resting. How could I be so brash as to puncture the silence with a chainsaw or an axe? I have done enough damage by felling the tree, last week. When the land is quiet, it begs me to slow down and listen.

Walking down the old dirt road, I spotted familiar coyote tracks in the snow, slipping over patches of ice. One clue that you're looking at a coyote's tracks rather than a domestic dog's is that the coyote walks very deliberately, while your pet Fido will have an uneven gait, sometimes darting off into the woods to chase something. Coyote knows where he's going, and why. When you live on the edge of starvation, you cannot afford to run after every shiny thing you see. Each step has to count. On the other hand, if you know you've got a warm home and bountiful canned food waiting for you, why not “go wild” and run around the woods? Isn't it ironic that our wild friends don't run wild? Out of necessity, they live more intentionally and carefully than us domesticated animals.

The deer and coyotes who dwell in the thousand-acre-wood near my house understand the landscape on a level that I can only dream about. Their extremely keen senses of smell allow them to navigate, find food, and avoid threats. But deeper still, they grew up here, evolved here. Every moment of their lives has been spent on this land. They never had the option to fly off to Europe for a month. This is the place; it has everything they need to survive. One generation communicates to the next where it's safe or fruitful to travel around the vast area. They develop trails and regular routes throughout the forest. If coyotes are smart enough to learn the habits of humans who live nearby, then they surely know the habits of the deer. All of the animals feel into the rhythm of the seasons and move with the land.

By grazing or hunting, they alter the landscape. If they reproduce too much and overeat, the land holds them in check. Their populations would overshoot the carrying capacity of the place, and then they would starve. Over many years, every creature in the forest contributes to an equilibrium. When disturbances blow through – storms, invasive species, humans with chainsaws – new opportunities for life immediately open up. But all the while, the ecosystem tends toward equilibrium.

My friend told me about visiting Australia, the outback, and Uluru. Eager to meet Aboriginal people, he noticed a man almost appear out of nowhere, walking slowly, somewhat slumped over. My friend observed that the Aboriginal folks all lumbered around like this, and it's not because they're lazy but because they are responding appropriately to their landscape. It's dry, hot, and calorically scarce. In those conditions, you don't spend all your time hopping and skipping. You travel deliberately, without wasting energy.

Now think about how we're told to carry ourselves – stand up straight; look forward; stick out your chest. It's the posture of people who have plenty to eat. We have so much to eat, in fact, that it gives us the energy to cause a lot of trouble.

There's a section of this excellent Paul Kingsnorth essay that I often think about:

Some commentators, especially those who became aware of Kingsnorth after his conversion to Christianity, seemed confused by these lines. “What about the Sistine Chapel? What about Rembrandt and Beethoven? Are we to give up those works of beauty and genius?” Increasingly, I see clearly that the things we build, however wonderful, directly result from not listening to the land, not respecting limits to growth, not knowing how to rest. And so, of course our culture (such as it is) will not last. If we genuinely want to give up the atom bomb and the coal mine, then we necessarily must renounce the plow and the Louvre. The totalitarian impulse in our culture creates both beauty and destruction, and it will not rest until earth is subdued. We can, like our indigenous relatives, create beauty and song, but when the foundation is broken, nothing we build on top will feel whole.

If you want a clue about how to live well on this earth, look to some of the remaining indigenous people. Whatever their virtues and faults as humans, a key difference between our cultures is that theirs respects the equilibrium of a particular place, while our culture chooses to be oblivious. And the results are plain to see: Aboriginal Australians have lived on their continent for 40,000 years; for the past few hundred years, our culture has been accelerating toward extinction of all life on the planet.

I see much of our effort to save the world as flailing around, desperate for techno-fixes to the problems we've created. We will devastate pristine landscapes in search of new, “cleaner” forms of energy so that we can keep this show going for a while longer.

In the end, I think it comes down to a basic avoidance of the land. The land can teach us how to live. But the trade-off is that we have to give up the myth of human supremacy, along with much of what we've built. If you want humanity to survive, you have to create a culture that becomes so adapted to a place that they know exactly how to shuffle around simply, on their own two feet. I think this simple fact is anathema to our techno-saviors, who will do everything in their power to avoid losing the comforts they feel are our birthright.

Unfortunately for us, even if we refuse to listen, the land and the ecosystem ultimately tend toward a new equilibrium. That equilibrium clearly cannot support 8 billion humans, living like we do. It's only a matter of time before everybody feels the effects of our ignorance of the land.

Well, this is where my thoughts roam when I'm sitting comfortably in my house. Who am I to say anything? I don't listen nearly enough. I don't depend on this forest for my survival. For lunch, I ate broccoli that likely came from Mexico. I have so many food calories in my body and my cupboard that I'm able to muse about the mischief that comes from having too many calories.

If I'm honest, becoming adapted to this place is not really in the cards for me. In another context, I would be old enough to be a grandfather by now. I'm not too old to learn new tricks, but I missed the boat when it comes to growing up in a culture that respects the earth.

The best I can do is listen to the land and try not to do as much damage as my cultural upbringing tells me is perfectly justified.

I am animated by the possibility that some refugees from our culture may have a better chance of participating in a sane equilibrium with the earth. The ancient story of Finnegas points out a way of orienting toward the future, even as the details of today's work remain frustratingly hazy. Finnegas went to the sacred pool with his fishing rod. For me, there is this elusive, mysterious, double-hilled forest. I've been given neither rod nor instructions. But I can quiet down, become rooted, and improvise.